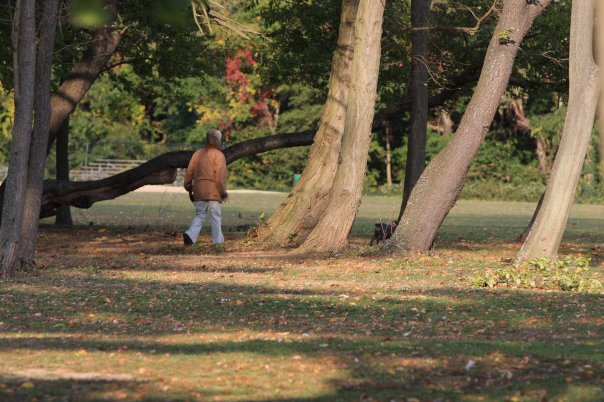 [Spring has arrived and I have moved outdoors and taken my lazy, winter-indulged body to the park for long, cerebral walks. It  was during one of those outings that I met a woman who was sitting alone on a bench near the pond. Having spied this older, eclectic-looking woman and wanting to get a closer look at her, I slowed my pace and came to a halt just short of the pond. There had been something curious about her that caused me to do so. As I approached her I sensed an un-earthly aura surrounding her; she had lived a full life, seen many things, and had a story to tell. By nature I am not a social creature, but I am out-going and friendly which allowed me to strike up a conversation with this woman. She was easy to talk to and I suppose she felt the same about me, because within a very short amount of time we were discussing the story I pen below. It is an extremely shortened version, of a modern-day Romeo and Juliet, which leaves the reader, the writer, and the protagonist with a longing for answers to a mystery that was left unsolved decades earlier.]

She said to him, “Why are you so much of an avoidant?  You and I are in the autumn of our lives. I want more, don’t you?”

Despite all the previous failed attempts to engage him, she still believed that she had enough fire in her belly for the both of them if only she could find the way to light a spark. She continued, in her typical devil-may-care approach to life, by trying to fan a flame that she knew surely must exist somewhere within him.

“Let’s buy a house with a barn for you and a library for me. END_OF_DOCUMENT_TOKEN_TO_BE_REPLACED

This work is licensed under a Creative Commons Attribution-NoDerivatives 4.0 International License.