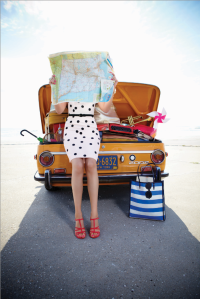 “One is not born, but rather becomes, a woman” ~ Simone de Beauvoir

Several years ago I realized that for some time the only two things that I have been unconditionally committed to have been my dog and my car, and today I made a decision to relinquish one of those commitments. I let go of my 12 year relationship with my beloved BMW convertible.  Silly, some may think of the sadness I feel, but history leaves its mark, and for those of us who are in tuned to the vibrations created by events, inside the sadness is also a bittersweet welcomed rite of passage.

Since 2002 my car and I have been a pair. We have traveled 117,000 plus miles together and lived in five different places. She has helped me move four times in seven years and made countless trips to the Bay Shore ferry to move things to and from Fire Island.

We have traveled the open road as one, with the top down and the wind at our back.  We have also been through storms that no one knows of, like the night rides to clear my head and the too often imprudent and reckless 110 m.p.h. anger-induced drives.

She has seen me through the deaths of most of my family members followed by the separation from a long-term marriage. Most often, she was littered with books while she accompanied me through five years of education and three college degrees. Often, so exhausted, I would sneak off to spend lunch or breaks inside this car, with the seat reclined, to nap or just rest.

You see, when she came to be mine I was an upper-middle class woman with all the trappings that go along with that status, but just a few short years later it was she who carried me and whatever belongings I could fit in her to my new abode and life.

This girl has heard my secrets, known my fears, felt my tears and pointed me in the right direction when I had no idea where I was going. I depended on her to take me where I needed to go and reinforced that belief by decorating her with a license plate frame that was engraved with words borrowed from one of my favorite Mary Chapin Carpenter songs, “I Rely Upon the Moon and St. Christopher.”

Like all close relationships, a person is somewhat sculpted and often identified by the time spent in that relationship. And so it is for me, both internally as well as through the perception by which people have viewed me.

It is time to move beyond both my own and others perceptions, because, I am no longer the gypsy who flew by the seat of her pants, seemingly directionless and without a sense of true self. I have arrived at the destination that was begun lo those many years ago by the woman with the BMW, top down, map in-hand.

I am grateful for the time we spent together; the fun times, and the not so fun

times. That little silver convertible was more than a car to me. She was my friend, my guide, my mentor, my therapist, my church, and so much more.

Tonight I turn yet another page and begin a new chapter.

Brenda Grace de Jong is the author of several short stories and pieces of flash fiction, along with her recently published book, "My Name is Elpee: A Trilogy". Ms. de Jong holds an M.S. degree in Human Services Leadership and Management and has worked with populations that include: victims of domestic violence, substance abusers, people affected by mental illness, individuals with HIV/AIDS and nursing homes residents desiring to return to the community. With a minor in Women's Studies, Brenda has, for several years, set about the task of mentoring women in various capacities, especially in the areas of education and empowerment. As a devout student of the Universe, Ms. de Jong maintains a daily vigil of sustaining and furthering her spirituality, especially within nature. She is an avid barefoot, tree-hugging, candle-lighting, ceremonialist, who conducts full-moon, solstice and equinox ceremonies, individually and with groups on Long Island and at her home on Fire Island. Having lived both a very conventional existence followed by an unorthodox and checkered lifestyle, Ms. de Jong has been known, over a cup of tea, to share some of her secrets with certain people; other secrets, however, she will simply smile while thinking about, but will discuss only with those who helped make those stories. You can connect with her on Facebook, LinkedIn, and about.me. View all posts by cherrycottagefi

One thought on “BMW Blues”

This work is licensed under a Creative Commons Attribution-NoDerivatives 4.0 International License.